Big Turk said:
Your prices have certainly gone up. When I travelled to the NC ST Experience in April it was only a 50 difference. Now Americans know how much Canadians have always been paying for gas. You have my sympathies.
Click to expand...
Putin!

TMac said:
A higher ethanol content will always result in lower mpg- just due to the BTU content as I posted earlier. As far as "In the US the difference in price between 87, 91, 93 is negligible"- at my fill-up last week in my area of TN, 87 is 70 cents cheaper than 93! Were I to buy no-ethanol 93 it's 90 cents.
Click to expand...
Even then, 87 with Ethanol is better than 93 without ethanol. At least for our SUV's according to Adam.

Good news is 3 of the 4 cars showed no appreciable difference, the bad news is the one that did suffer from Reg fuel was the Ford Ecoboost. 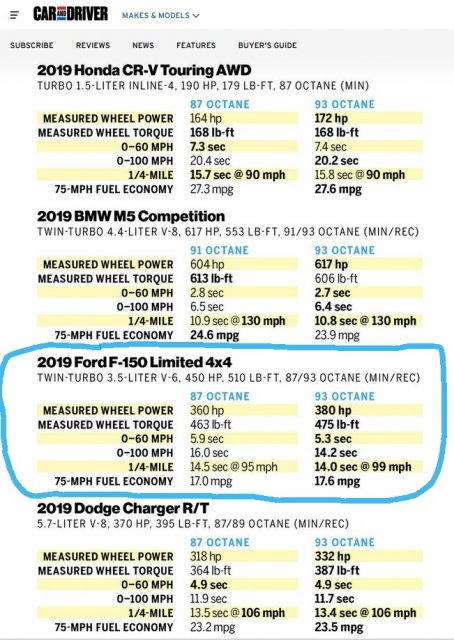 TMac said:
If you're just talking about mileage and not horsepower, all ECU settings optimum, mathematically on a part throttle cruise (highway) there isn't any reason to see less MPG on 87 than 93 unless the blend somehow has a higher BTU content.
So, if you're only interested in price per mile, 87 octane as long as it's cheaper is always going to give you a better mile per dollar than 93. If you're willing to give up horsepower (which is driven by peak torque or avg cylinder pressure), 87 will always win. The key to understanding this is because we're measuring part-throttle operation which would yield the same BSFC numbers at equivalent RPMS which is independent of octane rating- unless as stated earlier the 93 blend has higher BTU content.
Click to expand...
no I am not trying to date you, But I love your replys. your never a D you just give out facts. you dont try and make others feel less.
I never thought the octane would change MPG and was surprised so many said it did. I guess it could be anything wind what ever anyways thanks for another great reply

TheGovernment said:
. Wanna know something fun? As I worked for GM for the last 25 years, if you use 87 gas and blow up your motor and we test that gas and it’s anything but spec’d minimum grade (ie water in the gas, old gas etc) we can deny your warranty? Fun right! You will then have to go after the gas station for reimbursement! Doesn’t that sound like a good time? Lol
.
Click to expand...
oh damn has that ever happened? someone blew a motor and you tested the gas?
I always use 91 (Highest we have) but that would suck to chase after the gas station over a blown motor.

Rocketw19 said:
no I am not trying to date you, But I love your replys. your never a D you just give out facts. you dont try and make others feel less.
I never thought the octane would change MPG and was surprised so many said it did. I guess it could be anything wind what ever anyways thanks for another great reply
Click to expand...
Well, based on a couple of disagreements I've been in on this forum, I'm not sure everyone would agree about the "never a D" thought. But sometimes even when you're just giving out facts you end up stepping on someone's beliefs which can lead to confrontation. But thanks for the vote of confidence!

Rocketw19 said:
oh damn has that ever happened? someone blew a motor and you tested the gas?
I always use 91 (Highest we have) but that would suck to chase after the gas station over a blown motor.
Click to expand...
Has it happened? lol lots of times. Who does it happen to? problem customers LOL. It's one of those things that will ONLY get looked for if the customer is a jackass for the most part.

TMac said:
As far as your first statement, you're a little off. A Prius (for example) will require around 20 HP to overcome the various parasitic losses of the drivetrain and wind resistance at 65 mph. A box-like ST with AWD and much higher parasitic losses will require a much higher amount of energy to do the same. That's why that Prius will get ~45 MPG highway to the ~25 MPG on the ST.

If you're talking about not giving up HP for gas mileage, that's completely up to you. However, I think you're way off on the concept of torque. Torque is a static measurement and is a product of average cylinder pressure- period. Cylinder pressure is a measure of VE and air density. 93 will produce more torque than 87 because of detonation resistance allowing higher air density, but this has nothing to do with gas mileage which is a function of the parasitic losses and the BSFC (brake specific fuel consumption) of the engine at some particular RPM and load.
Click to expand...
The Prius needs only nine horsepower to maintain 60 mph. The article I read many decades ago said it takes 16 HP to maintain 60 mph and that was on a full-size sedan (a yacht in today's size classification). It stands to reason if the motor can produce enough horsepower at 10% vs.13%, it'll use less gas. As for cost-per-mile, that's different these days with a $0.60/gallon difference.

Best BSFC is generally at peak torque. However, we don't normally drive around at 60 or 75 at peak torque which means we're using some sort of throttling mechanism. Whether that's done by closing the throttle body, inducing an Atkinson-style mechanism through use of variable camshaft timing, or inducing EGR the BSFC maps are all over the place. The manufacturer purposely uses certain gear ratios to get the best BSFC numbers You're also not considering auxiliaries- pumps (oil, water), valve train (higher power required at lower RPMs) losses.

So, I'm not sure why you decided an article you read "decades ago" before any of these innovations is relevant. Let's take a Tesla. Very aerodynamic and more so than the Prius, wouldn't you agree? Their 75Kwh battery pack is rated at 255 miles (they don't list speed) so we'll just pick 4 hours equating to 63.75 mph (close to 65). At that pace, it's consuming 18.75 Kw. That equates to over 25 hp. The ST is nowhere near that aerodynamic and has an entire thing called an automatic transmission (which the Tesla does not) sucking up valuable resources. See where I'm going?

Our local gas chain must be seeing a tremendous dip in demand for 93. For several weeks, it’s only been 20 cents more.

https://www.quora.com/What-is-the-power-required-to-keep-Prius-rolling-at-60MPH-on-level-road
Click to expand...
You're right, physics hasn't changed- but you're missing the point. The 9HP calculated in that article is simply an approximation of overcoming wind-resistance...period. It does not take into account the HP to overcome other parasitic elements in the drivetrain: run the oil pump, water pump, transmission pump, alternator, etc. Not to mention frictional losses of bearings, tires, differential, etc. Those things are not inconsequential meaning it would require far more than 9 hp for the Prius to actually power itself down the road.